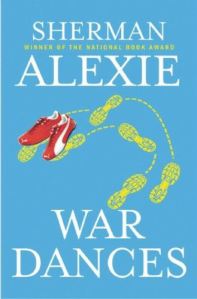 Had the chance to review Alexie’s latest collection, “War Dances” for the Juneau Empire. I know one person who enjoyed the review more than the book, but I also had mixed experiences with this one, a bit of an experiment in form or departure from his narratives. So in that case, very interesting.  Thanks to Amy Fletcher at the Empire for her continued support of a poetry and literature presence in newspapers….

In “War Dances,” literary virtuoso Sherman Alexie returns to adult fiction following his National Book Award-winning young-adult novel, “The Completely True Diary of a Part-time Indian.” Alexie’s narratives draw strength from encounters that force us to confront our own discomfort with issues of race, sexuality and love.

Whereas previous story collections (“The Lone Ranger and Tonto Fist-fight in Heaven,” “Ten Little Indians,” “The Toughest Indian in the World”) have featured linked stories and recurring characters, “War Dances” shifts – awkwardly at times – between stories, poems (odes to pay phones, mixed tapes and small-town sweethearts) and experiments in dialog and imaginative interviews. Structurally, these pieces detract from the three or four stories that constitute the core of the collection and represent Alexie’s dynamic storytelling at it’s finest.

Though much of the magical realism that drew attention to his earlier works is not present this time around, a cast of diverse, intriguing characters, from the state senator’s homophobic son to the summer obituary intern, exude an air of confidence, as if they know their existence is made possible by the hand of a master in irony and subtle humor.

In the opening story, “Breaking and Entering,” Alexie swings big, hard and fast, laying down a full-house hand of fear, race and shame. Freelance film editor George Wilson, in the midst of editing an adult film in hopes of saving (rather than exploiting) a young black star, is distracted from his work by the sound of a broken window. Before the evening is over, two lives are irreconcilably altered by a child’s aluminum baseball bat. The media charade which ensues raises the question: which is worse, the media’s exploitation of victims, or adult filmmaker’s exploitation of sexuality?

The title story, “War Dances,” explores a surreal world in which the narrator suffers from a Kafka complex involving roaches, earwax and impending hearing loss resulting from an annoying but benign brain tumor. All of this proves to be a bit overwhelming for the narrator while he’s visiting his father, who’s down with alcoholism and diabetes (“natural causes for an Indian”) in the hospital. A chance meeting with a fellow Indian in the hospital leads to a holy song and the blessing of a blanket for the dying father, who finds no sympathy in the irritated hospital staff. Some of the experimental forms which distract from the narrative in other sections work well here. The story itself is broken into 16 short parts, including the hilarious “Exit Interview for my Father” which features the poem “Mutually Assured Destruction,” written by the narrator as an ode to one of the most significant nights in his father’s life. The poem itself stands alone as a pivotal battle in the man-vs.-machine saga; however it is the list of 23 admitted contradictions (call them artistic license) to the poem that provide insight into the playful shaping and manipulation of memory involved in poetry and storytelling.

Truth and family fall under attack in “Senator’s Son,” as a hate crime inspired by homophobia force father and son to negotiate how to undo the situation with manipulation and denial. Told from the perspective of a conservative white narrator, this story stands out from the others due to the significant shift from Alexie’s usual narrative slant.

Other notable stories are “Salt” and the haunting, pathetic tale of a desperate man in “The Ballad of Paul Nonetheless.”

Alexie’s work isn’t for everyone, but this collection will please those familiar with his work and likely shock the pants off of those who pick it up unknowingly. Regardless, all who enter this work will find themselves transformed by the same storytelling magic which has established Alexie as one of the greatest contemporary inkslingers in America today. Dig in and hold on.

Reach out and touch someone.... Cancel reply